The sequel to Ethan Marcus Stands Up

Super chill Ethan and his super intense sister Erin attend a prestigious tech/maker camp during winter break of seventh grade. Even though they’ve reached a better understanding of each other after their experiences with Invention Day at school, Erin doubts her brother’s skill and dedication. Ethan knows he may be out of his league, but after seeing an exhibit about the Wright Brothers, he’s determined to finally succeed at making his standing desk invention, the desk-evator.

At the camp, Ethan teams up with Zen-girl Natalia, and Erin works with casual but brilliant Connor, who codes and likes her study app idea. The mysterious Marlon Romanov is there too, and Erin’s never forgiven him for his comment about men being better than “girls” in science. She’s focused on beating him.

But then everything starts to collapse. Ethan sees something suspicious and thinks there’s more going on at the camp than just kids inventing things. Erin fears her invention won’t measure up, and Ethan and Natalia aren’t making much progress. At the eleventh hour, it’s Ethan’s friend Brian who comes up with the solution that the siblings should combine their ideas and teams, but the clock is ticking. With one day left, can they actually create a workable model of their new, spectacular plan?

This funny, uplifting novel shows how believing in yourself but learning to work with others who have different opinions can get you exactly where you want to go. 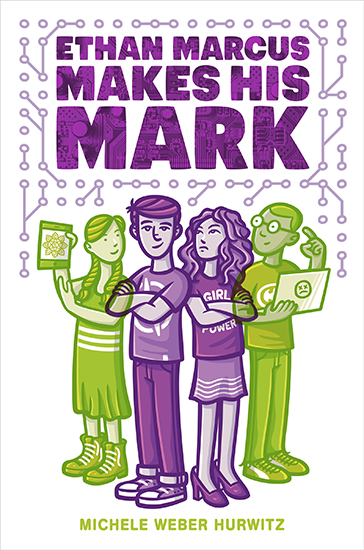 Hurwitz captures sibling rivalry with insight and humor. This entertaining sequel to Ethan Marcus Stands Up begs for a comfy reading corner where laughs are permitted.
—Booklist
Told in alternating voices, this book offers a variety of personality types and situations for middle-grade readers who like to see themselves and their worlds in story. A satisfying sequel.
—Kirkus Reviews